A Chain of Command Battle Report

Last weekend we played the attack and defend scenario using the excellent world war rules from Too Fat Lardies.

The scenario had a German panzer grenadier platoon trying to counter attack on the Western Front, ETO. The American infantry platoon defending had been in place for awhile so they had time to dig in before the German panzers arrived.

As the Germans were attacking they had more support, in this case an Adjutant, a Schwimmwagen, a 250 halftrack with a machinegun team and a Panzer IV tank.

The Americans had two entrechments, an extra bazooka team (apart from the one included in the platoon already) and an .50 cal Heavy machine gun.

We played on a 6x4' table. After the Patrol Phase both the Americans and the Germans had a strong precence close to the hamlet. We played the areas of trees and wheat fields as light cover if stationary, but counting as open ground if the troops were moving. 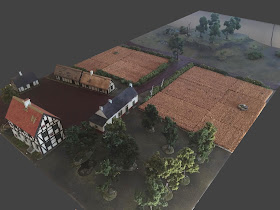 Pictures below, but first a short write up of the action.

It started off with a German squad advancing among the trees closing on the hamlet. Soon an American Squad deployed in the main building and opened fire on the Germans. After yet another German squad deployed amongst the trees the situation got from bad to worse for the Americans. They simply couldn't handle those four(!) MG42s but withdrew from the windows.

During that firefight a 250 halftrack arrived on the road, racing towards the hamlet. The Americans, dug in in the wheat field, made their presence known by first using a bazooka to stop the halftrack and then having a squad open fire, whiping the German recce squad out.

More German armour arrived and started shelling the dug in Americans with HE. As yet another  German squad arrived in the field and yet more entreched Americans appeared in center things got heated up as both sides took casualties and shock. The Americans were lucky to have very accurate bazooka teams on the field, hitting the Panzer IV over and over again, eventually making its crew abandon the tank. Also, the Americans benefited from having their Platoon Sergeant arrive on the scene when things were looking quite bleak, to restore order and direct fire.

The two German squads over at the hamlet wiped the lone American squad, it all ended in a handgrenade tossing close assault. They had trouble getting across the court yard though, as there was still a third American squad waiting for the right moment to strike.

In the end the German squad in the wheatfield broke and with that the German Force Morale. The Americans had at that time been balancing on a Force Morale of 5 for quite some time but were lucky with their rolls when bad things happened (and they did!).

A great game with lots of fun and some really cinematic moments.