Part I - An Uniform Overview - can be found here.

Today is the National Day of Sweden. Lets celebrate with some more Swedish Napoleonic information.

This Part II - A Modeling Tutorial - will give some clues on how to model Swedish line infantry in the 1806 model uniform, what could be described as a Mid Uniform, a transition between the Early and Late Swedish Uniforms.

Sweden's involvement in the Napoleonic Wars included fighting the French in Swedish Pomerania 1806-1807, again during the Leipzig campaign of 1813 and Swedish forces were also involved in the 1814 campaign against Napoleon. Also, Sweden fought Denmark-Norway several times during the Napoleonic Wars. Probably the most significant war during this period from a Swedish perspective however was the war against Russia 1808-1809. It lost Sweden its eastern half: Finland, that had been a part of Sweden for over 600 years.

When trying to find suitable 28mm miniatures for making Swedish Napoleonic soldiers you run into several problems. The hat is one. The Swedish hat is quite unique. But we have found that the round top hat used by the British marines and in the Egypt campaign provides a good starting point. The other problem is the single strap satchel. Almost every single country (and therefor miniature) had adopted real backpacks. As the Swedes didn't until 1811 it is difficult to find suitable models to use as a basis - without alot of work removing straps and the backpack itself. Another issue is the Swedish lack of crossbelts. The Swedes have a catridge box of course but no shoulder belt for short sword or bayonet (the bayonet sheath was worn on the backside of the catridge box). The Swedes do however have a thinner strap attached to their satchel, crossing the belt of the catridge box. Also, the copper bowl or bulkruka is carried in a strap over the shoulder.

With Perry Miniatures releasing their British for the Egypt campaign - with round top hats AND without backpacks! - we finally had some really good stuff to work with. Also, which is very much preferable for us as we intend to use them in skirmish wargaming, they were not in a marsch attack pose but instead in firing line poses. We have yet to find out if the Swedes - like these Perry sculpts - carried their greatcoats in a roll on their backs or across the torso as the Russians and Prussians - but this is good enough for us. Preferably they would have been without the greatcoats all together but you can't have it all.

1.
First off: buy some Perry Miniature BH 96 Centre companies firing line, round hats, 1801-1807.
Excellent miniatures in themselves but now to be transformed into Swedes.

2.
Trim away quite alot: the water bottle, the "wings" on the shoulders, the crossbelt buckle and the lace on cuffs and torso. A wire cutter with a flat back is perfect for this. Often you don't even need to use the file. Also, you might also want to cut away the queue (the long hair) and the bayonet sheath (on the left leg). It should be stressed that you could of course do a less involved conversion. 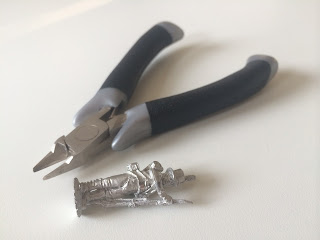 3.
Use plyers to bend the hat's brim upwards on the side of the plume. Be careful to protect the hat from getting damaged on the opposite side.


5.
To make the copper bowl, roll a small ball of greenstuff. Again, don't use too much. We make ours round, its much easier than trying to try and create the somewhat pearshaped real bowl. Attach it to the knapsack. When the ball is in place, take a tiny flat piece of greenstuff and press it down to create a lid.


6.
Press some greenstuff to the side of the hat and then cut away excess to make the upturned brim.

8.
If needed (depending on the result removing the lace and your prefered level of detail), add some thin greenstuff to make the cuffs smooth and to form the wide cloth belt. Also, you might want to add some greenstuff to the top of the plume (it is cut off on the model so it lacks texture at the very top).

Listing the different stages like this makes it look like a lot of job. It is reasonably fast though as you can make many things at once.