The TooFatLardies concept of Pint Sized Campaigns is very inviting. A couple of great ready to play scenarios in a campaign, lists of the forces to use and some well researched background and information on top of that. Not wanting to lose out we started to look at what could be a good first campaign to try out with the miniatures and scenery we had available. As it turned out our non-Normandy Western Front forces limited our choices somewhat.

So it was a matter of using the wrong scenery and figures for the scenarios or adapt the scenarios for a different setting. Having played alot of games in an autumn of 1944 setting we thought that we could continue on that path and try and "transfer" a Normandy campaign to the Lorraine campaign and the Battle of Metz. Looking at the 29 Let's Go campaign we realised it was a pretty straight forward campaign that could be used to portray many of the US major attacks against a somewhat weakened or disoriented German defender trying to delay the advance.

The idea is not to over complicate things but rather to give some light background to our alternative setting. Its about what works good enough, not trying to perfect it. So we will still for instance use the maps and rules of the TooFatLardies campaign, but try to give it an autumn 1944 Lorraine context. So instead of a naval bombardment we will say its the US airforce and so on. By adding just some extra information we hope to add some context to us playing the 29 Let's Go campaign using  Americans - some in greatcoats - against an SS platoon, amongst autumn trees... 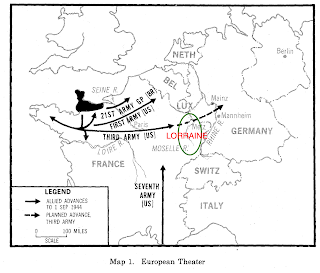 The Lorraine Campaign and the Battle of Metz

In September 1944 the Americans had left Normandy behind and raced across France. As the US Third Army closed in on the fortress city of Metz the Germans tried to fight back and stem the tide. Metz was surrounded by several forts and strong points and was also situated where several rivers - most notably the Moselle river and further to the southeast the Seille and Nied Francaise river - made bypassing the city very difficult.

There were of course many units involved in the Lorriane Campaign and the Battle of Metz. We will focus on two particular divisions. In early September the 17th SS Panzer Grenadier Division ("Götz von Berlichingen") retreated across the Moselle river. The Americans of the 5th Infantry Division ("Red Diamond") were right on their heels however and managed to cross the river Moselle and establish a bridgehead on the other side of the river, threatening to outflank the German positions in the city of Metz. We've played two games in that context earlier portraying the struggle for the beachhead at Arnaville (Game 1 and Game 2).

The Americans managed to hold on to the beachhead over the Moselle river at Arnaville but failed to expand it very much further for months. For our campaign we now return to the 17th SS Panzer Grenadier Division and the US 5th Infantry Division at the Arnaville beach head in november 1944.

The Americans launched a major push on November 8 to try to encircle Metz. At the start of the advance the 5th Infantry Division, positioned south of Metz,  crossed the another river - the Seille - and then advanced roughly along the eastward road from the village of Chemignot. The infantry was supported by armour, incuding the armour of Task Force Lagrew of the 6th Armoured Division. Passing a string of settlements along the eastward road - among them Vigny and Buchy - the Americans objective was to cross the Nied Francaise river to be able to then move north to link up with Americans units advancing from north of Metz, encircling the city off and cutting it off.

A week before the attack the 5th Division completed the relief of the 95th Division and once again occupied the bridgehead south of Metz which it had fought so hard to win in September. During the interim there had been only very minor changes in the German main line of resistance. The ranks of the 5th Division, much depleted by the September battles, had been brought back to strength by replacements and by veterans of the division who had returned to their units from the hospital.
The general mission assigned the 5th Division was to attack toward the east and make contact with the 90th Division, as the latter circled around Metz from the north, while at the same time maintaining touch with the XII Corps on the southern flank. As planned, the main effort in the attack would be made on the right wing of the 5th Division, aiming at the seizure of an objective (outlined only as a "goose egg" on operations overlays) astride the Nied Française river in the neighborhood of Sanry-sur-Nied and Ancerville.

This direction of attack would permit the 5th Division to swing wide of the outer Metz works in the early phases of the advance. The center of the division objective was some ten miles east of the 5th Division bridgehead lines. Although the target for the attack was designated as the moderately high ground on both sides of the Nied Française, the chief tactical object of the 5th Division attack would be the seizure of the communications complex running through this area. An advance to and across the Nied would cut four of the main roads leading in and out of Metz. Moreover, the 5th Division would be placed in position to block the railroad line between Metz and Strasbourg and could deny the enemy the use of the junction line running to Saarbruecken.

Opposing the US 5th Division was, among some other units, the 17th SS Panzer Grenadier Division. The Division was actually overstrength in early November but had received so many replacements, to compensate for its earlier losses, that it was no longer rated as an “attack” division and was considered fit only for defense. Also, like the majority of the panzer grenadier divisions on the Western Front, the 17th SS did not have the mobile and armored equipment to distinguish it from  ordinary infantry divisions.

At the time of the attack the 17th SS Panzer Grenadier Division had only four Mark IV tanks and six assault guns. However, the artillery regiment had all its guns. Also, the division could draw support from the concentration of army artillery being built up behind the XIII SS Corps. Further support could be found from the 48th Division that had elements in the area and from parts of the 38th SS Panzer Grenadier Regiment that was held in reserve.