AAR: Battle of Metz Game 1 - The Bridgehead of Arnaville, september 1944

A Chain of Command Battlereport 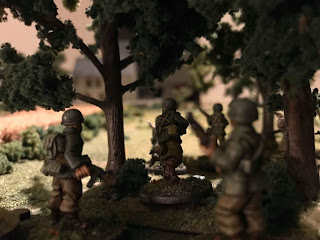 In September 1944 the Americans had left Normandy behind and raced across France. As the Americans closed in on the fortress city of Metz the Germans tried to fight back and stem the tide. This time at the river Moselle, close to the French village of Arnaville.

In early September the 17th SS Panzer Division ("Götz von Berlichingen") retreated across the Moselle river. The Americans of the 5th Infantry Division ("Red Diamond") were right on their heels however and managed to cross the river Moselle and establish a bridgehead on the other side of the river, threatening to outflank the German positions in the city of Metz.

After the first days of fighting at the bridgehead, the Americans were able to get some support, including armour and tank destroyers, across the river. Our pair of games is based on the situation in mid September with the American starting to expand the bridgehead and the Germans trying to contain them.

As the Americans expanded the bridgehead their scouts reported enemy troops by a farmhouse in the line of advance. The Germans had to be driven off from their position for the attack to continue.

For the first game we used the Flank Attack scenario from the Chain of Command rule book.
The defending Germans start their patrol phase in one quarter of the board while the attacking Americans have the opportunity to start their patrol markers in a flanking position. To win the Americans have to drive the Germans off the board while maintaining a Force Morale of at least 3.

We keep our support secret until they were deployed.

As the pre-game barrage rained down over the Germans the Americans deployed a squad amongst the trees of their central jump off point, with the intention to quickly send a pair of scouts forward.

The Germans, being concerned of not getting any men on the field in time, managed to get a squad through the barrage and deployed by the farmbuilding, effectively shutting down any ideas of US scouts claiming ground. The Germans were clearly going to have to be attacked in full. This became even more evident as the barrage ended early.

The Americans started to build a base of fire over at the ruined buildings, deploying a Heavy machine gun and a rifle squad. The Germans responded by having a tripod MG42 opening up from a farmhouse upstairs window.


The German machine guns took a heavy toll on the US fire base, as the US assault squad moved closer out of sight amongst the trees. With casualties mounting the US deployed its Lieutenant by the fire base to keep up the fire and rally shock. The Platoon Sergeant joined the assault squad, together with a flame throwing team.

A flanking US squad appeared which started to put covering fire on the German machine guns to lessen their effect. This triggered yet another German squad to appear. With a third German squad moving upstairs in the farmhouse both platoons were now fully deployed.

Both sides took some severe punishment in the continued fire fight. At the hight of the battle the US assault squad moved up to the treeline and the flame thrower fired on one of the two German squads outside the farmhouse to great effect. At the same time the remaining US troops fired on the other German squad outside by the wall, pinning them. This was the critical moment - the US assault squad closed in for the kill with hand to hand combat over the low wall. The German squad was wiped out but many - too many - Americans fell as well. The flame thrower got one more shot off before it was eliminated by the Germans. The victorious US assault squad also found itself very exposed and took fire from the Germans in the farmbuilding. The pressure got too great and the US squad broke, falling back across the field only to be shot down as they run. With that the US Morale got too low to complete the mission and the attack was called off.

A great game! The Americans had a tough job getting at all those German machine guns in good cover. As the barrage ended early the Americans had to build their attack gradually. The right moment appeared eventually but the assault proved too costly also for the exposed attackers so they weren't able to get a foothold in the farm. In the end the German machine guns cost the American Force Morale too much under the build up to the assault so that when the attack finally was launched the US Force Morale was already dangerously low. Good and tense game though! With the American advance blunted the Germans just might do what they very often do: counter attack! More of that in the next AAR: At the Bridgehead of Arnaville 1944 - Game 2!