The First of Two Big Chain of Command Battle Reports at Arracourt 1944 - the American counter attack to clear Hill 318 from the Germans for the last time, the final day of the tank battle at Arracourt, September 29 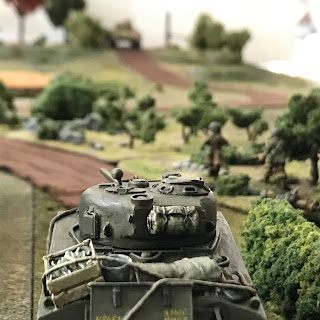 After Patton’s Third Army swept across France they finally started to lose momentum at the fortress city of Metz, in september 1944. Metz was surrounded by several forts and strong points and was also situated where several rivers - most notably the Moselle river and further east the Sielle river - made bypassing the city very difficult.


Awhile back we played two scenarios (Game 1 and Game 2) based on an early American beachhead across the Moselle river at Arnaville, south of Metz, in mid september.

This time we are a few weeks later in september 1944, and a bit further south where the US 4th Armoured Division have managed to cross the rivers and reached as far as the village of Arracourt, to the southeast of Metz.


What then happened was the Americans' largest tank battle of the war. The Germans needed to stop the Americans rapid advance in the area. The 5th Panzer Army - including the newly formed Panzer Brigades 111 and 113 - attacked. Although the Germans were superiour in numbers and had brand new Panther tanks their tank crews were often green and they were critically low on recce troops. The Americans on the other hand had experienced crews and used excellent combined arms tactics with the Armoured division working close with the Tactical Air Command, calling down Jabos on the Germans as soon as the cloudy skies gave an opportunity.


Playing a part of Arracourt is a great opportunity for us to field some armour and play Big Chain of Command for the first time. Our two games - this is the first - depict the last effort of the Germans, after ten days of hard combat. Hill 318 to the south on the battlefield was a key position, giving excellent fields of vision across the landscape below. It changed hands several times over during the battle. Our games are inspired by when the Germans have succeeded in one final effort to take the crest of Hill 318 yet again, on the morning of September 29. The German forces are made up from the surviving elements of the 11. Panzer Division and Panzer Brigade 111 and 113 together with Grenadiers of the 15th Panzer Grenadier regiment. The Americans of the 51st Armoured Infantry - supported by the 8th Tank battallion, CCB of the 4th Armoured Division - then counter attacked to try and take it back!

Our two games represent two sectors of the American push for the crest of Hill 318 at noon September 29.

The Forces and the Scenario

We played the Attack and Defend scenario from the Chain of Command rulebook where the attackers have to drive the enemy off the table while not having a Force Morale lower than 3. The counter attackning Americans were the attackers.

The Americans had a one platoon of Armoured Infantry from the 51st Armoured Infantry Battalion and a full Sherman platoon of five tanks from the 8th Tank Battallion. All Regular troops. The latter platoon had two 75mm Shermans and three 76mm Shermans. In addition the Americans had access to a Medic, a Mineclearing Team, a Preliminary Bombardment and a 60mm Mortar Team.

The Germans fielded a platoon of Panzergrenadier from the 11. Panzer Division (NB: lacking Heer grenadiers we used miniatures for SS Grenadiers instead) and an understrenght platoon of three Panther aufs D. To keep things simple we played them all as Regular troops. They had access to an extra Senior Leader and an Additional Grenadier Squad.

The Germans had taken the crest of Hill 318 yet again in the morning, driving the the American infantry of the 51st armoured battallion back down the hill. Now the Americans went back in,  through the wheat fields towards crest well aware of that the German grenadiers and Panthers were up there somewhere. They hoped that the recent US artillery barrage had softened up the Germans somewhat.

The Americans set up a infantry fire base on their right with one squad advancing slowly though some shrubbery. On the other flank the advance of two Shermans were met by a lone Panther coming trough the US artillery bombardment. The first shots were fired but with no effect.

When yet another Sherman entered, rolling down the road all hell broke lose.


On the other flank more armour arrived. The advancing Shermans were met by yet another Panther. It developed into a shooting match of quantity vs quality. The Sherman guns simply coundn't peneterate the fronts on the Panthers despite several hits. At times the repeated hits rattled the Panther crews but it was never enough to threaten them seriously. Having identified the lead tank of the Sherman platoon the US platoon commander were hit several times aswell. Although his tank started to fall apart around him and his crew, they managed to stay in the battle, although his command ability was severely hampered.


As the tanks slugged it out the US infantry kept advancing in cover along the road. Their advance was delayed as the lead squad sergeant fell to the first bullet coming their way. They kept moving though but were stopped in their tracks as German infantry appeared to their front. On the other flank it was the same story with the US infantry not being able to advance. The German infantry was hurting though as the US armoured infantry kept firing, getting support from multiple machine guns and a 60mm mortar.


The US infantry advance and the hurting of the German infantry was too little too late. Seeing their armoured support being shot into flames one by one while the Panthers being seemingly undestructable, the US infantry's hearts were not in it anymore. The US morale dropped and the counter attack for Hill 318 had failed in this sector.

Its was great to try out the Big Chain of Command rules for the first time! The rules worked really well eventhough there were only two players playing all four platoons.

The Americans had a really tough job in trying to handle all those Panther tanks. And as the Shermans started burning the US morale dropped, not only for the tank platoon but naturally for the infantry platoon aswell. They did inflict casualties on the German infatry but it was really too late. The Shermans kept hitting the front of those Panthers and were abit unlucky in not being able to knock out a single Panther. But it was probably very much like the situation on the field in 1944 aswell. :-) Eventhough we increased the tablesize for the game it was still very difficult for the Shermans to find a chance of flanking fire, as the Panthers wisely didn't advance much.

In hindsight the US infantry probably needed to get moving a bit earlier to draw the German infantry into sight and into the fire but the US advance were slowed down by loosing leaders to German machine guns.

We will return to Arracourt in a not too distant future to see if other neighbouring US platoons are more lucky in their attempts to take back Hill 318.
Posted by NW Crew at 9:32 PM