A battle report using the Pikeman's Lament ruleset, depicting a raid during the Thirty Years War 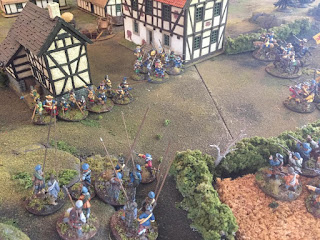 The Thirty Years War had been raging on the European continent for already more than a decade when Gustavus Adolphus in 1630 landed in Northern Germany with an army, initially to take control over the German cities on the northern German coastline.


Reay's Regiment, a regiment under Scottish commander Donald Mackay, 1st Lord of Reay, joined the Swedish forces and was involved in taking the coastal cities of Stettin and Colberg. Like an earlier game, seen HERE, this game is set in between the taking of those two cities. During that time, in August 1630, six companies of Reay’s Regiment, was ordered to re-join the main body of the regiment at Stettin. En route, one of the boats foundered off the Pomeranian coast near Colberg, and nearly 200 men landed with only themselves, their "swords, pikes and some wet muskets". The Scots surprised the town of Rügenwald (today Darlowo in Poland) and obtained fresh powder, ammunition and other supplies. They held the town for nine weeks until Gustavus Adolphus sent Hepburn’s Scottish regiment to relieve them.

In an earlier game of this setting the Scots clashed with Imperial troops outside Rügenwald. In this game, that we played quite some time ago, the Imperial forces have managed to contain the Scots to the city of Rügenwald. The Scots don't just sit and wait for Gustavus Adolphus to come and rescue them however, but try and make life as miserable as possible for the Imperials. This game sees the Scots sneak out of the city to raid one of the Imperial camps in a nearby settlement.

We played the game using The Pikeman's Lament ruleset. Its a great ruleset written by Daniel Mersey and Michael Leck, from Osprey Games. The scenario was the Beating Up Quarter scenario from the rules with the Scots attacking and the Imperial troops defending. The defender - apart from a small unit - start asleep in the buildings and must successfully activate to enter the table. The attacker set up a given distance from the buildings. To win the attacker must succeed in setting fire to four buildings and not lose half of his force.


Set up and deployment

The Scottish attackers initially had some trouble putting houses on fire. Also, the Scottish infantry struggled against the Imperial forces that quickly managed do get out from the buildings to defend their camp. The Scottish fortune changed however and some Scottish horsemen managed to put first one and then another building on fire before the Imperials could come and stop them. In the end, just as the attackers were taking some heavy casualties they managed to set a third and fourth building on fire, thereby achieving their objective and they returned to Rugenwald victorious.

Below is the game in pictures.